Stage fright is caused by your brain 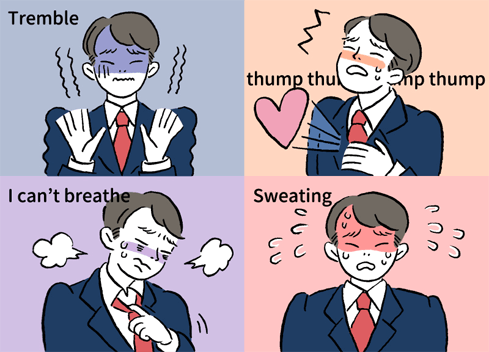 When you speak in public, your heart is beating hard, your hands are sweating a lot, your legs are trembling, and your face is tense. Why do you feel nervous in front of people? It is related to the mechanism of your brain.

There aren’t people that feel stage fright right after they are born. If they have a negative experience such as making big failures or being ashamed in public, their brain memorizes an image that public is equivalent to danger.

When anyone encounters a dangerous scene, the sympathetic nerves in the autonomic nervous system dominate, the heartbeat becomes faster and your body sweat.

In this state, the brain commands the body to give out energy whether to face danger or escape from it. ※The sympathetic nerve is also called “the fight-or-flight nerve”.

To summarize, stage fright’s symptoms appeare because your brain recognizes that public equals danger. This is a kind of a defense mechanism. 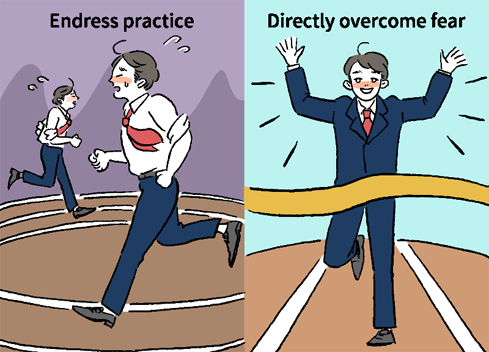 I was suffering from extreme stage fright for many years. This problem was getting worse after obtaining a lot of public speaking experience. I felt that I am inferior to others, so I kept losing my confidence.

Many people who want to overcome their fear go to speaking classes and seminars. And they try to learn how to construct the story, when to make a pause, how to breathe from your abdomen. They also try to speak in front of the group members, etc.

However, these speech exercises don’t aim to change images of public speaking. People who have a light problem may become better, but people who instinctively feel fear in public can’t reach the same level expected.

Some people might be afraid that their fear will increase unnecessarily by speaking and being corrected in front of other students.

As I said earlier, the symptoms of stage fright are caused by a defense mechanism that makes our brain believe that public equals danger. If the image for public speaking does not improve, the physiological and psychological response, caused by the defense mechanism, can’t be suppressed at all.

Even if you try to publicly speak without changing the image of it, the defense mechanism will activate. As a result, the negative image of public speaking will become worse and you will be brought into a negative spiral. 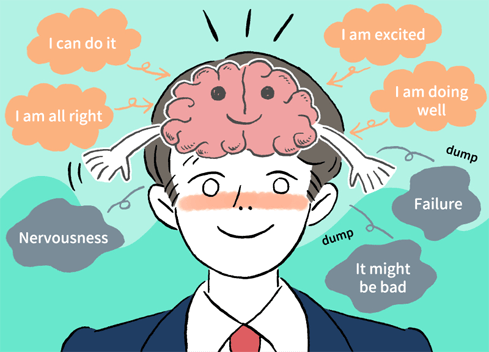 In order to overcome stage fright, the most important thing is to eliminate your fear of public speaking by improving your image of it. Using a wrong approach can be fatal. Please be careful with the methods you choose because they not only waste your time and money, but also cause your symptoms to get worse, like what happened to me. This is reminder I will repeat over and over again.

Sally’s method based on brain science focuses on changing the image of public speaking directly. It will result in changing your self-image and the image of the actual situations to a positive one.

And when the time to actually stand in front of people is near, you just have to do image training and you won’t have to practice speaking a lot of times. If you change the image of the public to be positive in advance, you will be able to speak without getting nervous.

You can do all the training at home. It is extremely powerful, even though it is simple. You can overcome stage fright in a short period. Some people were very successful at presenting the next day after the training.

This method is a trustworthy technique that got a recommendation letter from Dr. Shiga, the leading electroencephalogram researcher who has won the Gold Award from the former U.S. president Obama.

Regardless of the fact you usually work hard, you may not be valued or recognized by others just because you can’t speak in public. In my case, everybody perceived me as a failure because I was not able to make one-minute announcements at work. In my personal time, I didn’t want to introduce myself, so I kept refusing to go to drinking parties.

However, after overcoming stage fright, everything has completely changed: both business and personal aspects of my life have drastically changed for the better. Why don’t you change your life as well using Sally’s method?